Briskets were once considered worthless chunks, but today, they’re a treasured specialty food. So, how did this happen? This though a piece of meat is either one of the juiciest, most delicious chows around, or they’re a tough, chewy and leathery chunk. The difference is all in the cooking process. Any great brisket is made on a low and slow barbeque, and it’s simply not a piece you can make in an oven, a large electric griddle or a built in outdoor griddle. When it comes to briskets, smoking in an offset smoker is the way to go, and more often than not, you’ll need upwards of 10 hours of cooking to reach that succulent perfection. 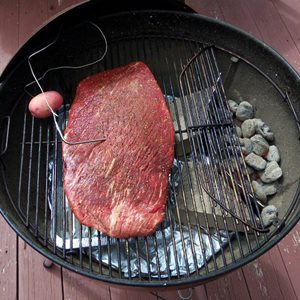 But, let’s not get ahead of ourselves. First of all, what is a brisket? In short, it’s the lower chest cut of beef. Brisket is a part of a cow chest that’s between and a little above its front legs. The thing that makes this part special, though, is that it’s one of the strongest muscle groups on cattle, supporting approximately 60 percent of the animal’s weight. It’s a muscle with a tough job. It supports the entire front half of the cow, and cattle can weigh anywhere between 1200 and 1400 pounds.

As a result, briskets are strong, tenacious muscles with a lot of connective tissue. You can see this plainly when you take a look at a chunk of meat. The long, thick fibers are quite easy to see. Connective tissue, mainly in the form of proteins collagen and elastin, is a rubbery tissue that feels tough and chewy if not prepared properly. However, if left to cook long enough, the connective tissue turns into gelatin. When this is achieved, the brisket has the most mouth-watering tender texture.

A brisket can weigh anywhere between 8 and 20 pounds. If you’re planning a barbeque, you should plan to get at least 1 pound of raw meat per person. It might seem a lot at first, but the yield after cooking is much smaller. In general, a brisket will lose 50-60 percent of its original weight to fat trimming and cooking shrinkage.

Once you have a brisket in your hands, you might notice something besides the large size and considerable weight of the piece. It is actually comprised of two main parts which are very distinct. These two parts are named the flat and the point, and when together, the whole chunk of meat (all together with fat) is called a full packer. Let’s see what these names mean:

These two parts of a full packer are separated with a layer of fat. You shouldn’t separate these two parts, as they make a perfect combination together. However, you’ll notice that the meat is unevenly thick because the point is smaller and only covers one side of the flat. That’s what makes cooking a brisket such a feat. Making sure that the thicker part of the chunk is well cooked, but the thinner one isn’t dried out is a skill that is learned with practice.

Apart from the fat part that separates the two sides of brisket, you’ll notice a thick outer layer as well. It’s called a fat cap, and you’ll want to get it trimmed to anywhere between 1/8 and 1 inch thick.

How much you want to trim depends on the particular recipe you want to use. While many pit masters disagree on how much fat exactly you need, make sure not to remove all the fat from the fat cap. Leaving some fat on the chunk will make the meat tender and succulent, as it will prevent the inner parts from drying out during the long smoking process.

When choosing your chunk from the butcher’s, look for fat that’s white and meat that’s red. Gray or yellow fat, and graying and brown meat are the telltale signs of a barbeque disaster!

The Meat of the Matter

We all love a good brisket. However, it might seem too overwhelming to tackle making one because of such high risk of it ending up a dried-out, chewy fiasco. Knowing a little bit more about the brisket, its structure and characteristics will definitely make the whole ordeal much simpler. Ultimately, the knowledge and experience of GrillnSkill will lead to that mouthwatering juiciness. We hope that this guide helped you understand this tasty piece of tough love a bit better! Now that you’re ready, let’s get grilling!

Michael Wise has been a chef for a long time. Preparing all sorts of foods enabled him to gather experience in meat prep, and by extension – cookware and cooking equipment in general. He decided to sum it all up in blogs and guides, hoping to pass his knowledge to people who decided to take the matter in their own hands and start grilling by themselves.